Aging populations primarily affect governments economically.  As a society ages, the number of retirees as a share of the population increases, which increases the amount governments have to spend on pensions.  At the same time, as more people retire and leave the workforce, the amount of tax revenue governments receive decreases.  This reduces the amount of funding available for other programs, which can negatively affect a government’s ability to alleviate other social problems and conduct forign policy.

Societies experience economic consequences of aging populations as well.  Countries with lots of retirees have a high dependency ratio.  This can lead to labor shortages that make it hard for businesses to find enough workers to operate.  This problem affects almost all businesses, including the firms that care for the elderly members of the population.  Governments are also sometimes forced to raise taxes in order to pay for higher healthcare and pension expenditures, leaving people with less discretionary income and slowing overall economic growth.

Some countries with aging populations have taken steps to attempt to mitigate the harms posed by the demographic imbalance.  Many nations have resorted to raising the retirement age or reducing the amount paid out by pensions to reduce government expenditures.  This is often politically difficult; reducing government benefits tends to anger voters and cause protests.  Countries with low female labor force participation can enact policies to encourage women to enter the workforce.  Changing culture is difficult, but removing childcare and other barriers sometimes increases the number of women working and paying taxes.   Societies that have a lot of technology, like Japan, can use automation to help alleviate their labor shortages and meet the increased demand for elder care.

There are also ways the governments can attempt to tackle the root of the problem.  Some governments, like Hungray’s, provide higher child tax credits in order to encourage people to have more children and fight the long term demographic imbalance.  Immigration is commonly a proposed solution to demographic imbalances.  Immigrants can change the culture and ethnic makeup of a society.  Many governments are reluctant to allow the large number of immigrants necessary to stabilize their imbalance in, especially if the population is skeptical of immigrants, as it is in Japan and much of Central Europe.

Many countries in the Middle East and Africa are experiencing the opposite of an aging population: a youth bulge.  A youth bulge is when a society has an unusually high number of younger individuals because of a high birth rate and/or a low life expectancy.  Most of the countries with youth bulges are developing countries located in Africa, the Middle East or Latin America.

Like with an aging population, the direct effects of a youth bulge are economic. They can put a strain on certain resources that are commonly used by young people, like education.  It can lead to job shortages because there aren’t enough entry level positions to accommodate all of the young people wishing to enter the job market.  A shortage of jobs reduces the power of individual workers; they know that they can’t ask companies for much because many other people would love to have their job.  This, especially in the absence of government regulation, can lead to low wages and other exploitative labor practices.

The economic effects of youth bulges have effects on other aspects of society.  High unemployment, especially among young people, leads to frustration and a sense of unfairness.  When people blame the government for their economic misfortune, protests and even violence can erupt.  Unemployment also makes it easier for terrorist organizations to recruit members; people with little to no chance of getting a normal job are desperate for the income and societal status terrorist organizations can provide.

Youth bulges are a challenge for governments and societies.  Governments that have more young people should expect to spend more on education and programs that help children because there is more demand for them.  Creating jobs, especially for young people, should be a priority for governments.  Educational and job training programs can help young people find employment.  Some societies with youth bulges take advantage of their vast supplies of entry level workers by exporting lots of labor intensive goods. Some of the destabilizing effects of unemployment can be dealt with by expanding welfare benefits like unemployment insurance.  Emmigration can reduce the number of young people in a society, although there usually aren’t enough people leaving for the impact to be significant.

In the long term, the best way to tackle the roots of a youth bulge is to decrease the birth rate and raise life expectancy.  Educational programs, especially for women, can help reduce the birth rate.  Better access to birth control also reduces the number of children born.  Improving access to and the quality of healthcare prolongs life expectancy and lowers the death rate.  Economic development and higher incomes tend to solve many of the roots of youth bulges. 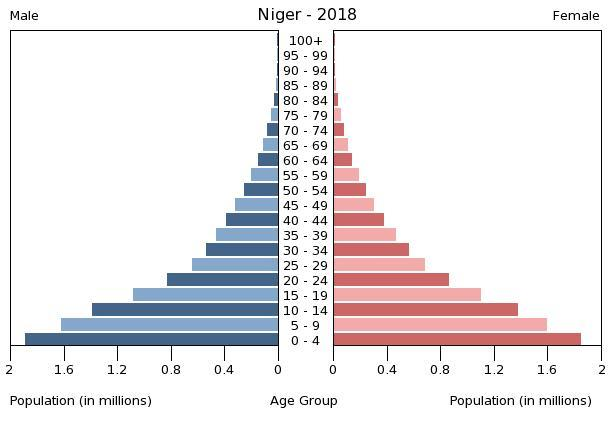 This is a population pyramid for Japan, a country with an aging population.  Relative to the size of its population, Japan doesn’t have many young adults and children and has a sizable population of over 65s.

Extemp questions rarely ask about demographic structure directly.  Most of the time demographics are mentioned in a speech, it is being used as a lens to analyze other aspects of a country’s political and economic position.

The CIA World Factbook has population pyramids and descriptions of demographic structures for every country in the world.  If you ever draw a question asking about the challenges facing a country you have never heard of or don’t know much about, demographic imbalances can provide a body point.  For example, the government of a country with an aging population is likely going to have problems paying for pensions and a society with lots of young people is going to have trouble creating jobs.

Demographic imbalances are commonly at the root of other problems faced by a society.  If you are ever asked how a problem with a demographic or partly demographic root should be solved, proposing ways to mitigate the harms of the demographic imbalance can be a good point.  For example, a question asking how the Iraqi government should combat terrorism could include a point about creating jobs for young people.

Demographics influence countries in the long term, which is useful when being asked to make predictions.  For example, countries with aging populations are unlikely to remain or become powerful internationally and are likely to have economic problems.  This can be very useful if you want to provide evidence for the unsustainability of China’s rise because China’s population is aging rapidly.

What challenges are facing the government of Nigeria?

Why are young Tunisians increasingly feeling disillusioned with their government?

How should governments in the Middle East combat the root causes of terrorism?

How should the Japanese government mitigate the harms associated with their aging population?